VBS is in full swing. Thanks for to all the teens that are helping out. You are doing a great job!
Posted by THE NET at 10:51 AM 1 comment: 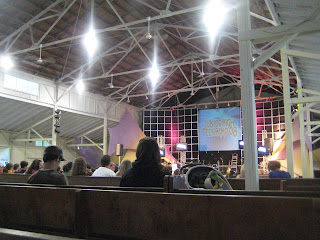 What a crazy couple of weeks in good ole Fairmont Campgrounds. First was Jr. High camp, where we took 12 students and 4 adults. It was a great time! We learned a ton about God and how to live for Him. There was one powerful service that focused on confession. After the "confession" time, we had another few minutes of worship that was really hard to end. It was cool.

The guys who went with us to camp were those who were always "getting into trouble". It’s kinda funny because Pastor Brian is the Jr. High camp director and he was always hearing about what was going on in dorms...and it turned out that the trouble was the dorm that our guys stayed in. There was also an "incident" with super glue being spread out on all the toilet seats. The camp caretaker was all over Pastor Brian about that one, too. Turns out that it wasn't super glue but, rather, Karo Syrup. And, guess what? One of our guys did it. :) Pastor Brian got a confession phone call about that one. We asked him what he thought about it...He got a pretty good laugh from it.

Sr. High camp was really good this year, too. The speaker was a guy who used to be one of our own district youth pastors--Jeff Eckart. He did a good job and the music was good, too. The coolest afternoon game time was the "Wild Cat" games, which turned into a giant mud fight. Everyone was covered with mud. Good times.

Let us know your camp stories from this year. It was great to hear what God did for you when you spoke at last Sunday’s service. Do it again but, this time, post it.

Start your online search or shopping from here and the youth group gets free $.

GoodSearch
& GoodShop
YOU SEARCH OR SHOP
WE GIVE!

Add to your site

THE NET
is the Student Ministry of Chapel Pike Wesleyan Church.